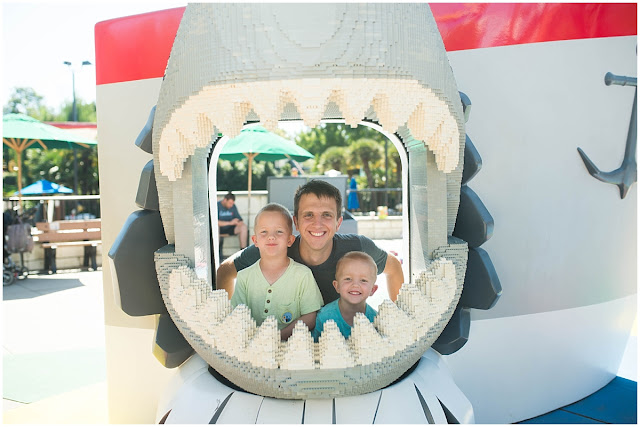 We got to St. George every year to watch my dad run the marathon, so this year we decided to go to California for a couple days before since we were already halfway there. The boys have just gotten into Legos earlier this year so we figured it would be the perfect time to surprise them with a trip to Legoland!


Here's my review of the park:

The park is pretty small in comparison to other theme parks we've been to. We walked around the whole thing several times. But it was nice because we didn't feel rushed at all and the boys got to ride all the rides they wanted to multiple times. There were no fits or wishing they could go on one more when it was time to leave.

The Rides:Totally meant for little kids. Specifically I'd say 4 to maybe 10. (Although I probably wouldn't take a 10 year old here.) My 3 year old could ride almost every ride there, but there were several rides that you had to be 4 to go on. And he couldn't ride a few of them by himself, one of us had to go with him. But he rode the big roller coaster with us and loved it!
My 5 year old could ride everything, but needed an adult on a few things because of his height.
Our 1 year old could ride a few rides too. It was fun to ride some rides as a whole family. :) Baby girl LOVED the submarine ride where we got to see fish, sharks and sting rays all while looking for some hidden treasures made out of Legos.

There were so many fun things made out of Legos, a few playground areas and a splash pad. In some of the line areas of the bigger rides there were little places where kids could go play with Legos while the parents waited in line. Kinda cool.

Legoland Hotel:
The hotel was fun to stay at. It's literally at the entrance of the park. The breakfast was amazing. The lobby had some fun places to play with legos and stuff. We chose a pirate themed room and it was great! The best part for us was that the bathroom separated our room from the kids room. We could put them down and not worry about waking them while we stayed up for a bit.

They had a safe in the room for the kids--they got to go on a little scavenger hunt around the hotel to find the combination, and then open the safe to find a little surprise every night. 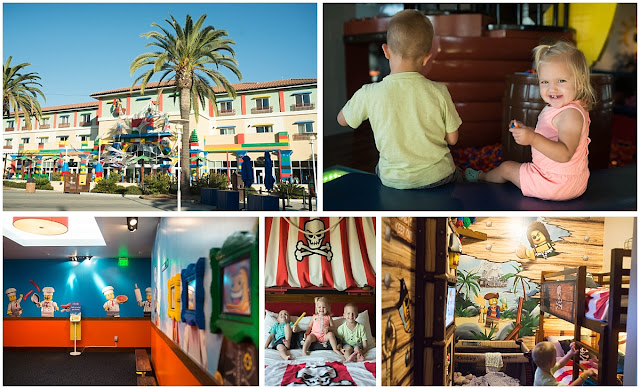 Park Hours:
The hours at the park are 10-5. I think it's perfect for little kids. You're not tempted to stay out super late, which means you can be done by dinner and get the kids to bed at a decent hour. :)

Off Season:We went in October, so we hardly had to deal with lines at all. In the afternoon we could walk onto all the rides! It was the best, and the weather was perfect!
The water park area was closed, but it looked pretty fun.

Overall I feel like it was totally worth it for our family. That being said, I won't be going back. It was a great one time thing. Since the park is smaller, we got our fill and as mentioned before, it is tailored towards little kids. Although there is a new section based on the Lego Movie coming to the park next year. :) The boys adored it all and ask to go back almost daily.
It's also just a short drive from the beach, so we spent the first morning playing in the ocean before heading to the park that afternoon.