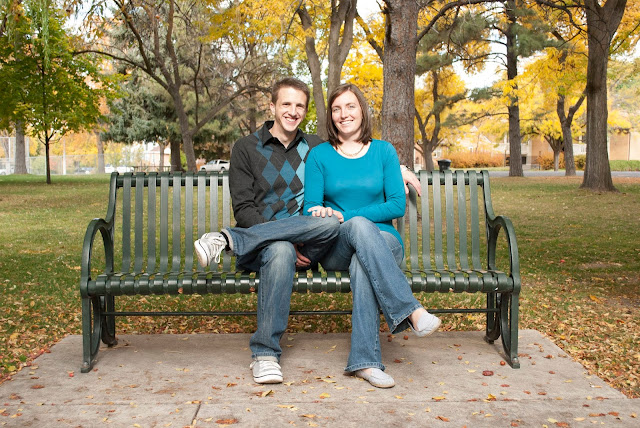 October 12th!
Earlier that week, Travis had told me we were going on a date that Friday night.
I was a little suspicious, because we hadn't really planned a date in a while, we just did stuff.

Amanda was certain that he was not proposing. He was a slow mover, there's no way
he'd propose yet. So I questioned it.

I had an art show up on campus from my time in Germany. My parents came up on the
12th to see it. They took Travis and I out to lunch at noodles and company. It was also my mom's birthday (which makes it an easy date to remember.)
Travis headed back to work and my parents were dropping me off at my apartment complex.
I asked my dad if Travis had asked for permission to marry me.
He said no. And asked "Why? Do you think he's going to ask you to marry him?"
I said yes.
He asked "when?"
I didn't want to say "tonight" so I just said soon.

That evening, instead of going on our planned picnic, we went to Bluebird Cafe, because it was raining. Then we went to get Hot Chocolate at Kneaders, cause that was kind of our thing.
Travis suggested we go sit on THE bench at Adam's Place Park.
Guys, it was raining. It was at that point that I was 100% positive he was going to propose.
So we showed up at the park. It was dark and wet.
Travis was grabbing a blanket for the bench, totally forgetting his hot chocolate, which I grabbed for him. We sat down on the bench and .5 seconds later Travis was on his knee with a ring in hand.
I obviously said yes.

We sat and talked for a few minutes. I brought up that he hadn't asked my dad.
Well, my dad lied. Travis had been down at my parent's the night before. They were the only ones who knew, and my dad couldn't believe that I had asked him that question minutes before they thought they'd made it out of there without spilling the beans.

We headed to his house to tell people the news and decided on December 28th for our wedding day.
It snowed lightly, just like I'd hoped.
And now, nearly 6 years and 3 kids later, I love our story even more.