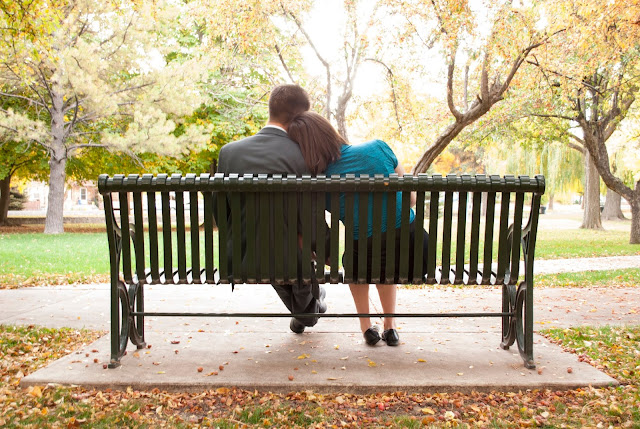 Sometime after our 3rd date our ward was having a ward temple day.
Travis texted me that afternoon to ask if I was going and offer me a ride.
We showed up to the temple the same time that Amanda arrived, and, being the girl that I am after not seeing her all day I had to catch up with her. So I hopped out and started telling her some
story or something, when Travis runs up next to me and grabs my hand.
I was literally mid-sentence and had to try and keep my cool and finish talking to Amanda
while so many other thoughts flew through my head.

After that things kept moving forward, slowly but surely. We met each other's families.
Went on plenty of dates. Hung out all the time. Travis told me he was building a house. Yeah, a house. In Logan, just a few blocks away. It was supposed to be finished in the summer.
It was nearing the end of the semester, and I would be moving home, as well as heading to Germany for a 5 week study abroad program.
Neither of us had kissed anyone before, and I wasn't sure when it was going to happen.
It didn't happen before I moved home.
I was a little nervous, cause he would be moving into a new ward while I was in Germany.
New ward meant new girls. I was going to be out of the country for 5 weeks.
Turns out, I had nothing to worry about.
He emailed me every single day while I was abroad.

Once I was back in the states I visited Logan almost every weekend, and he came down to West Jordan the other weekends.
Finally, probably sometime at the end of July, after we'd been dating for about 4 months, as I was about ready to head back to West Jordan after a weekend in Logan, he gave me a kiss goodbye.

I headed back up to school, excited to be able to spend more time with him.
I was usually a step or 2 ahead of Travis, but never wanted to push him, so I always
waited for him to make a move or bring something up.
We hadn't talked about marriage at all. I mean, that's obviously where we were headed. That or

One day, after a family party, on the drive back to Logan, he finally broached the topic.
He asked if he wanted the ring to be a surprise or not. I told him I would love for him to pick it
out, but I realize that can be daunting, so I sent him some images of things I would like.
That was the beginning of September. So I was thinking maybe we'd have a winter wedding.
October rolled around...Still nothing, so I start thinking perhaps he was thinking a May wedding.